A Letter to John and Bruce 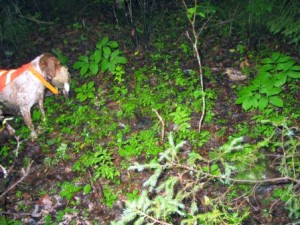 John and Bruce,
This is another great note from your teacher friend in New Hampshire. Brady and I spent the Summer in Northern Maine running a conservation camp. The picture I am sending you is from a youth hunters apprentice ship program through Safari Club International. Brady and I were asked to help with 12 young kids on a Pheasant hunt. Pheasants are hard for Brady a little just because they run so much. But as the picture shows Brady was on a long track after a young man winged this pheasant. I heard Brady’s bell far out in the thick stuff and thought he lost the bird so I called him back around and when he was coming back his bell went silent.

So I figured he was pointing the pheasant, to my amazement when I went in to flush the bird, Brady had the pheasant in his mouth and was locked on a woodcock. I couldn’t believe that with a nose full of pheasant he would still point his favorite bird to hunt!!!!!! We are still training and learning, but Brady is only two and I am still a rookie, But we love to do it all. Thanks again for this amazing experience.