His pointing is beyond excellent. Couple weeks back he was out of sight, but the GPS showed him pointed a grouse in a rock band at 2300 feet. We were descending off the top of a mountain and he winded the bird in ground I would rather avoid. I had to go around. He was still on point 15 minutes later when I climbed back up a more reasonable route from below. Sure footed as a mountain goat. He has even pointed a deer. And, he has learned how to ID sooty grouse 150 feet up monster trees on steep terrain by the sound of their hoot and scent on the ground. I now get close and just watch where he goes. Sure enough, he finds the tree and the bird is 150 feet in the air!

His retrieve has improved this season after improving last season. For the first time he dropped two huge birds nearly at my feet and stepped back. Formerly he has been reluctant to yield the bird. And, he happily runs 200 feet (vertical) or more down slope to retrieve a three pound grouse and haul it all the way back up. (Those things can really roll!). Saves a lot of work on my part.

He goes like a tornado from 8am till 6pm up and down thousands of feet over rainforest jungle, arctic tundra, and mountain terrain. He has faced down 3 bears without flinching. He is one heck of a bird dog and pal. 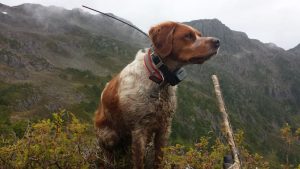 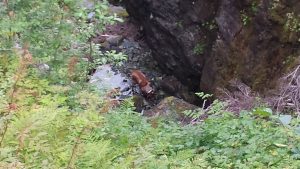 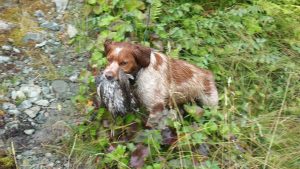