Sadly Jody and I had to say goodbye to Selby last Monday.  She was three weeks shy of her 18th birthday.  She was a tough old lady who won hearts wherever she went.  During the procedure there were many tears including all of the vet techs from Animal Care who stepped in to say goodbye.

She was truly a wonderful companion at home, and fierce in the field.  She taught me much about hunting and appreciation of the outdoors, made a believer of hunters who only had flushing breeds, and never whined or yelped in pain.  Even as I was pulling over 70 porcupine quills from her mouth!  Her and my other dog had a porky treed but were barking at the base of the tree.  I approached and noticed a baby porcupine, and then Selby rushed in for the retrieve.  After 10-15 feet she dropped and we went home to start the procedure.  Some were buried deep in her lips.  She would walk away from me and when called returned to have another half dozen pulled.

Once in the field we stopped at a rock pile to determine our next move when I noticed she had her front paw poised in classic pointing dog fashion.  Except there was blood pouring from her paw.  So to the truck and Jody bandaged her and she was done for the weekend.  Poor Jody had to spend time with a very upset hunting dog who was not ready to quit!  Unquestionable prey drive.

I almost instinctively look to step over her favorite resting spots in the house.  She will always be missed, always with treasured memories, and stories to be told over and over.

Thanks for a wonderful companion who was truly a family member, 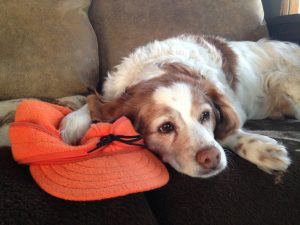